Again in 2015, you are welcome to get acquainted to the old Dutch breed ‘Dutch Belted’. This is a unique breed of cattle that occurs in our country since 1200AD and is especially recognizable because of its white band (the sheet) around its middle.
Dutch Belted Day is held for the fourth time and, attracted over 4000 visitors last year.

For more information, you can visit the 2016 date www.dagvandelakenvelder.nl 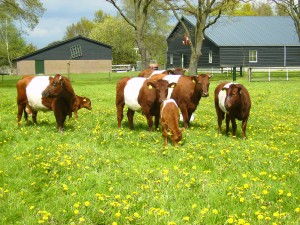 On Wednesday, November 5th Huub and Nel Vermeer received ninety chefs, restaurant owners and teachers in Farmstead ‘de Lakenvelder’ in Gilze, where they have twenty Lakenvelder and sell home grown meat. A half hours Sligro was on the farm, to taste this exclusive meat and to hear about the oldest Dutch breed. The visit was part of the Sligro Fresh Tour 2014, a tour along suppliers to present their products.

In front of the stable with calves Leon Benders Association Belted Cattle (VLR) tells his story. This association ensures a responsible breeding. “To keep the breed pure, it must comply with various features. The white sheet on the back and belly  has to be at least 20 cm  wide and can not get beyond the bones or elsewhere. They are black (dominant) or red and there are five color shades. Most calves are born in the spring. That usually goes fairly smoothly, because the Dutch Belted is finely built and is relatively small. Also on the characteristic head are horns, both at the bulls and cows. ”

After birth, they continue to suckle for about five or six months with the mother, which is a lot longer than in other breeds. All animals are held here biologically, with protein for dry and minerals. They are as much as possible outside in the pasture or in a nature reserve nearby. When it’s too cold they go on the straw in barns. Everywhere are the calves, which are not nervous at all from this visit. “There they are used to it, because it is also a vacation homestead.” After weaning they go to the breeder, where they leave after twelve to fourteen months to be slaughtered. To avoid stress as much as possible, they go there in the same group as they grew up. “That’s for the flavor, like the extensive way of keeping and slow growth of the breed,” says Leon Benders.

Inside the farm promotes hobby farmer and president of the Foundation Lakenvelder Meat Ad van der Salm this rare breed, that was nearly extinct in the late seventies. “When there were only a hundred copies, but thanks to efforts by the breeder club when it was founded, there are now about 3,500, with about five hundred bulls annually.” In order to make the race really are here to stay, should The meat is marketed as exclusive meat. “But people should know of this special seasonal product. That is why it so important that there are chefs, restaurant owners and teachers of the kokopleidingen to taste and learn about this increasingly popular breed in the Netherlands. ”

So every participant will taste three appetizers: one on rye bread served Lakenvelder beef tartare with whipped crème fraiche, a beef carpaccio with truffle cream and a hint of a rundersukade gently cooked on a skewer with onion compote. Frank van der Farthest had never heard of this breed and he is not alone. “Apart meat something tastier than other meats,” says Connie Jaw. “But it is less suitable for a kitchen setting, because it is quite pricey.” Wilfred Clermonts and Inge Scheepers Asperdt Jar in Nederwetten consider their brasserie. “The taste is slightly stronger than other beef. It is durable and is held here biologically, appeals to me as well. Moreover, you can present it fine as a regional product. “Tastiest beef Netherlands during Slow Food Presidium in 2010 left the twenty top varieties race behind him, when it was named the best beef in the Netherlands. And that happened in the election by-products consumer platform New Verse. “It’s a bit sweet flesh is fine thread. Previously, the draft animals and they were able to store sugar in their muscles. This gives it a distinctive taste. Furthermore melts and cooks are retained at a low temperature so texture and flavor. “For veal chefs find it a bit too red. Therefore the hot young beef.

Except that it Lakenvelder Meat on Sligro’s sales, now also at Deli2go and Baker Street sausage roll with an exclusive 100% Lakenvelder Meat Stuffing be purchased. Is working on the launch of an exclusive Lakenvelder croquette too. And thanks to the sale of farm Lakenvelder Meat at the Vermeer family may be the delicious meat regularly at home on the board. Here are sold packages of 5 kg, packed in double portions, for € 50, -.

We will be represented with a booth to promote our Dutch Belted and our farmstead. Some of our beloved Belted cows will be present.

Since April 25, 2013 we are considered a recognized breeding center for Dutch Belted cows.
The goal is to preserve the Dutch Belted cattle, which belongs to the rare breeds and promote further development.

We are also named ambassadors for this rare breed.

Please contact us for more information about and a meet and greet with this special breed cattle.